What is the Rank Meter?
The Meter on your Profile is called the Rank Meter.
This meter shows the amount of Support Points a broadcaster has earned during the current End Time period, relatitive to other broadcasters in the same Rank Class. Broadcasters use the Rank Meter to collect Rank Points, which increase or decrease their Rank Class level.

All users begin each period in the -1 area on the left, and will move their position on the meter higher as they earn Support Points.
Each point between sections, called a border, has a minimum amount of Support Points needed to reach it. These borders are not fixed and often increase throughout the day, due to other broadcasters generating Support Points.
The Rank Meter counts Support Points that are earned during the 24 hours from one End Time to the next End Time.
The meter is divided into four areas, corresponding to the Rank Points that can be earned (-1, 0, +1, +2). After End Time, the final meter will be calculated and users will earn Rank Points according to their position on the meter. To earn the Rank Point, the user's position must be within the desired area when End Time occurs. The amount of Support points needed for each area is not fixed, and often changes throughout the day. We encourage all users to broadcast until End Time, or monitor their meter, to ensure they can achieve their desired Rank Points.
The user's new Rank will be reflected about 5 hours after End Time.
End Time is one of Pococha's official periods - Definition of Official Pococha Periods
Each day, all broadcasters start at "-1" on the left side of the meter. As they earn more Support Points, they move to the area on the right. On days a broadcaster does not broadcast, their meter will automatically be set to the -1 area, unless a Freeze Pass is used.
To avoid losing Rank Points, a user can active a Freeze Pass to freeze their meter.
Example of a Rank Meter
Below is an example of a user's typical Rank Meter 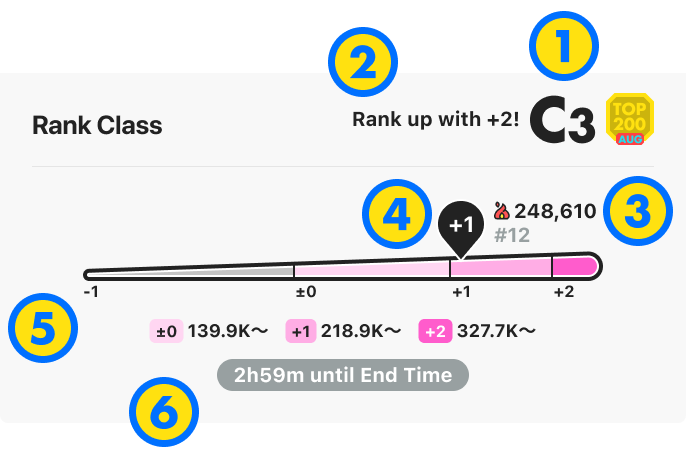 (1) Current Rank
The current rank is C3.
(2) Rank points required to increase rank
3 more points are needed to move up in rank from C3 to B1.
(3) Current Support Points and Rank Meter position
Currently, 248,610 Support Points have been earned during the meter’s period.
This amount of Support Points is 12th amongst broadcasters the same End Time and rank.
(4) Current position
Currently the broadcast is in the "+1" Rank Point area. The user will earn +1 Rank Point if they finish within this area when End Time occurs.
(5) Border
The Support Points required for rank point "0" is 139,900 or more.
The Support Points required for rank point "+1" is 218,900 or more.
The number of Support Points required for rank point "+2" is 327,700 or more.
(6) End Time
The Rank Meter will be closed in 3 hours and 5 minutes.
Explanation of Rank Meter
■ When Are Ranks updated?
After a certain period of time after End Time, Rank Points will be allocated and reflected in the user’s Rank.
8:00pm PST End Time (9:00pm PDT) Deadline: New Rank will be decided and reflected around 4 hours later, around 1:30 a.m. PST (2:30am PDT).
■ About Border
The number of Support Points required for each area is called the border, and may increase throughout the day especially before and after End Time, depending on the Support Points earned by other broadcasters in a user’s Rank Class.
Border values are rounded up, therefore, the boundary values may deviate. (For example, a border value of 100.99 may be rounded up and shown as 101.0 on the meter. But the border amount is still 100.99)
*If the number of broadcasters is extremely small, the information may not be displayed correctly (this will be addressed individually at a later date).
■ About Meter Ranking
A user’s position on the meter is determined by the Support Points earned by users in the same Rank (or Rank Class) at the same End Time.
- If the number of "ranks" in the "End Time" is small, it will be a "rank band" to prevent the border from soaring.
*Borders will be adjusted as necessary for each rank.
■ What Happens If I Do Not Broadcast?
If a user does not broadcast by the End Time, Their meter will be automatically set to "-1". We recommend using a Freeze Pass to prevent losing Rank Points!
■ When Is The Rank Meter Displayed?
A user’s Rank Meter can be hidden depending on the broadcasting status. When the meter is hidden, please check the status of your support rank from Daily Rank Report
The number to increase or decrease the rank is determined by the Support Points at the selected End Time every day, and the rank is reflected by the fixed number displayed about 4 hours after End Time.
Note:
- Because Support Points are calculated after the support actions of viewers and the broadcast status of subscribers are completed, there may be up to a one-minute delay in the calculation of the Support Points after End Time. The number of Support Points will not be finalized until the tally results are available. Please understand this.
Rank Class Change Conditions
When the meter value reaches a certain point, your Rank Class will change.
You can check which +/- values are needed to change Rank Classes in your Profile or Daily Rank Report. 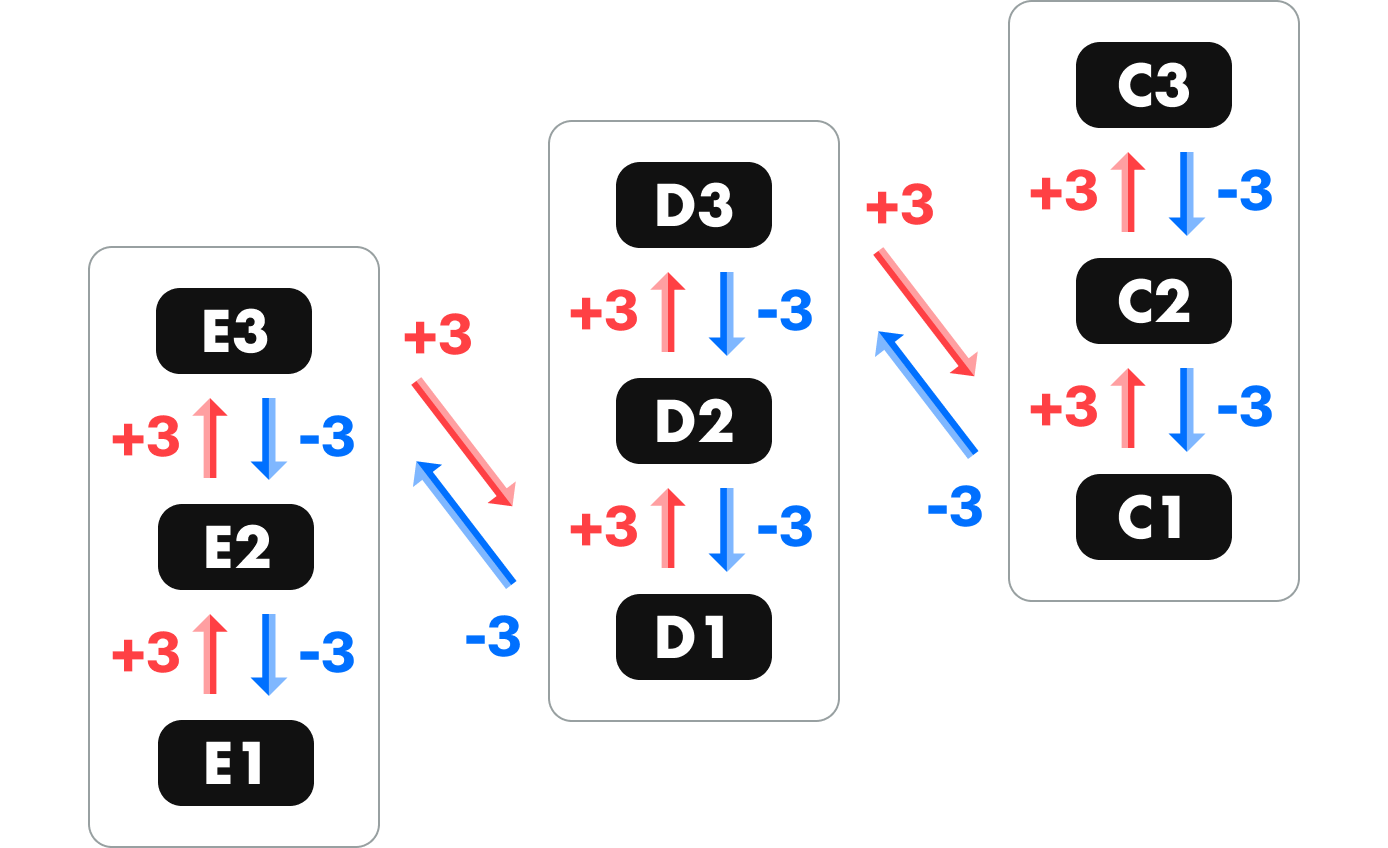 Note: When your Rank Class changes between or within Ranks, your meter will be reset to 0. For example, if you need +1 to move up a Rank Class and achieve +2 the following day, the extra +1 you earned will not be carried over to your new Rank Class.
The highest possible value for Rank Class A5 is +3 (-6 to rank down).